Material made from crab shells, trees could replace plastic packaging 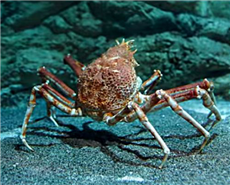 From liquid laundry detergent packaged in cardboard to compostable plastic cups, consumer products these days are increasingly promoting their sustainable and renewable origins. Now researchers at Georgia Institute of Technology have created a material derived from crab shells and tree fibres that has the potential to replace the flexible plastic packaging used to keep food fresh. The new material, which is described in the journal ACS Sustainable Chemistry and Engineering, is made by spraying multiple layers of chitin from crab shells and cellulose from trees to form a flexible film similar to plastic packaging film. Read More

Acidic oceans cause fish to lose their sense of smell

Fish are losing their sense of smell because of increasingly acidic oceans caused by rising levels of carbon dioxide (CO2) in the atmosphere, new research shows. When carbon dioxide is absorbed by seawater carbonic acid is formed, making the water more acidic. Since the Industrial Revolution, oceanic CO2 has risen by 43 percent and is predicted to be two and a half times current levels by the end of this century. Fish use their sense of smell (olfaction) to find food, safe habitats, avoid predators, recognize each other and find suitable spawning grounds. A reduction in their ability to smell therefore can compromise these essential functions for their survival. Read More

Petron Corporation said that it will expand and upgrade its Limay, Bataan refinery in the Philippines with technologies from Honeywell UOP. When the project is completed, the refinery will produce 75,000 barrels per day of refined fuels and 1 million tons per annum of aromatics, increasing its capacity by 55 percent. Honeywell UOP will provide the basic engineering design, licensing and services for a condensate fractionation unit, naphtha hydrotreater, and UOP CCR Platforming, Sulfolane, LPG and kerosene Merox and distillate Unionfining units. These technologies will enable Petron to meet growing domestic demand for motor fuels by upgrading 100,000 barrels per day of condensates and light crude oils to aromatics and automotive fuels. Read More

Total SA to acquire two gas-fired combined cycle power plants (CCGT) in the North and East of France from KKR-Energas. This represents an electricity generation capacity of approximately 825 megawatts (MW). Through its 73 percent stake in Direct Energie, Total also has 800 MW of capacity in two power plants of 400 MW each in France and in Belgium. The development of another 400 MW plant is planned in the Brittany region. Total has an objective of achieving 15 percent share of the B2C gas and electricity supply market in France and Belgium within 5 years. Read More